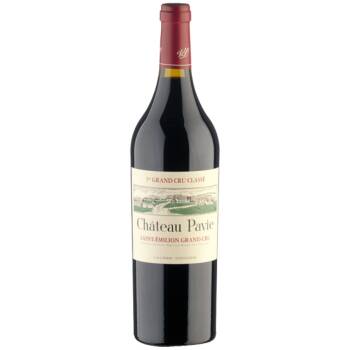 Robert Parker's Wine Advocate:
The 2005 Pavie is an absolutely amazing wine that has shed most of its oak aging (usually 24-28 months). Opaque purple in color, it is beyond belief in extract and concentration, but perfectly balanced and pure, with the oak well-integrated. Massively concentrated, and still a baby, this wine tastes more like it’s two to three years old than one that’s been around for a decade. Intense notes of grilled meats, spice box, cassis, black cherry, licorice and graphite arepresent in abundance. Enormously endowed, but with superlative purity and balance, this is the greatest Pavie in the early Perse era, starting in 1998. Only the 2009 and 2010 rival this in his opinion, but I would add the 2000. This killer effort should drink well for another 50 years and demonstrates the greatness of this terroir owned by the Perse family. Only 7,000 cases were produced from a blend of 70% Merlot, 20% Cabernet Franc and 10% Cabernet Sauvignon. Bravo! Drink 2015-2065.

Add to my cart

The chosen amount is too high

The chosen amount is not valid

An internal error has occurred. Our technical department has already been informed.

Products will be delivered in 3 – 5 days

*The indicated prices refer to shipping units of specified size